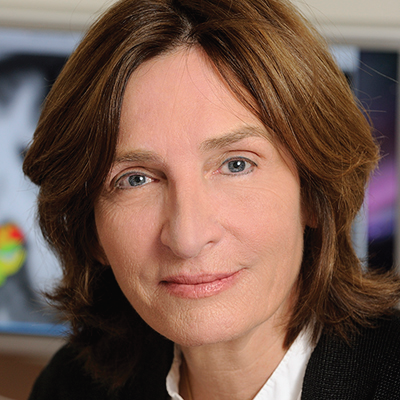 For her work in the development of AGB-101, a novel drug targeting hippocampal hyperactivity to help slow or stop the progression of amnestic mild cognitive impairment in early-stage Alzheimer's disease.

Michela Gallagher, PhD founded AgeneBio in 2008 and currently serves as CEO. Her research led to the discovery of neural overactivity in neurocognitive aging localized to specific circuits in the hippocampus. She led the Phase 2 trial of AGB101 and initiation of AgeneBio’s drug discovery program to develop selective GABA alpha 5 positive allosteric modulators. She is the Krieger-Eisenhower Professor of Psychological and Brain Science and heads the Neurogenetics and Behavior Center at Johns Hopkins University. Michela has published over 250 peer-reviewed papers in the field of cognitive neuroscience. She is a Fellow of the American Association for the Advancement of Science, the American Psychological Association, the American Psychological Society.

Michela Gallagher, PhD is the 2018 recipient of the Melvin R. Goodes Prize for a lifelong commitment to Alzheimer’s drug discovery and development. She was the 2014 recipient of the Society for Neuroscience, Mika Salpeter Lifetime Achievement Award. Her work has been recognized by the American Psychological Association, D.O. Hebb Distinguished Scientific Contribution Award in 2010, a Freedom to Discover Award from the Bristol-Myers Foundation (2003-2008), and Senior Scientist Award from the Ellison Medical Foundation (2008-2012).

She has served on the Boards of Scientific Counselors at the National Institute of Mental Health and the National Institute on Aging and currently serves on the Advisory Board of DZNE the German Center for Neurodegenerative Diseases. Prior to joining Johns Hopkins in 1997, Dr. Gallagher rose through the faculty ranks at University of North Carolina at Chapel Hill, where she was the Kenan Professor of Psychology. She earned her PhD in Physiological Psychology from the University of Vermont and in 1968 earned her undergraduate degree from Colgate University as one of two women in the university’s first female graduating class.